Acclaimed Sydney based landscape architect, Sue Barnsley has for the past 20 years created artful and regenerative responses to large scale restorations and private gardens alike. We catch up with Sue as part of our conversation series with creatives engaged in their own Native Plant Projects…

Sue Barnsley Design Landscape Architecture is a Sydney-based practice recognised for a creative response to context and ecology for both private and public works. An Adjunct Professor of Landscape Architecture at the University of New South Wales, some of Sue’s notable projects have included restoring the waters at Clear Paddock Creek, Commonwealth Place in Canberra, designing the Brickpit Ring Walk at Sydney Olympic Park and the award-winning Barcom Park in Darlinghurst.

A garden isn’t a set piece, it’s a relationship. First it starts as an idea, imagined and brought to life with drawings, then it’s made real. We have always been interested in what happens after the garden or landscape has been translated from plan to reality – the changing dimension of place over time. As plants grow and die, uses shift. That’s the evolving aesthetic of a landscape.

Our design philosophy anticipates change. We ask: how can we recharge the soil microbiology? What is in the seed bank? How fast will the ground be protected from weeds and erosion? Will species reseed and renew? Will planting trees in copses speed up growth and bring shade and protection? Are trees removed in time or replaced? How is the understorey managed as sunny spaces become more shaded? Who will care for this place. As landscape architects some of these questions are in our hands but it is a curatorial process that at some point is passed on because landscapes are not static. We are interested in ideas of tending and cultivation as well as ecological succession.

“My dream is to come back to our gardens and parks and to be part of this ongoing process of growth and change. It is about being present. Sometimes we’re lucky…”

How did you arrive at this particular specialty – was it a long-time love of plants and nature?

We moved a lot when I was young and everywhere we went my parents both made gardens and took us out in the wilds. It gave me a curiosity about the world outside and a love of making.

How do Australian natives inform your designs and what do you love about them?

I have a vivid memory of returning to live in Adelaide as a seven year old and being amazed by the light, the colour of the landscape and the dazzling forms of the flowers. The gums with yellow blooms, the wild exotica of a bottlebrush! So different from the soft deciduous forests where I had lived before.

Local plants have a relationship with the landscape that has evolved over millennia. They are adapted to their conditions and part of a bigger ecosystem.

I like the sense of arriving somewhere and feeling the topography, the weather, the vegetation, the sounds of different birds and connecting with the psychogeography of place. 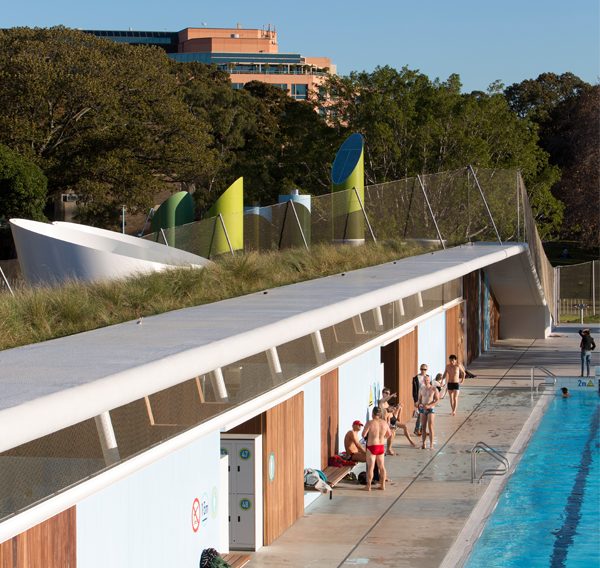 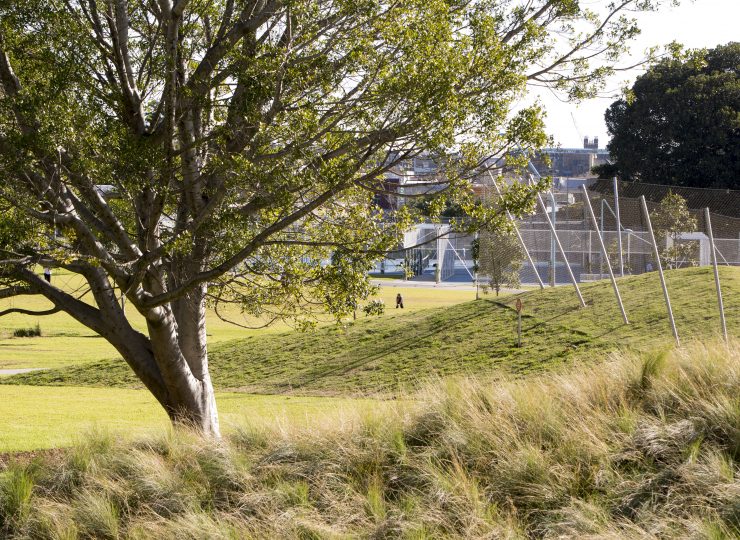 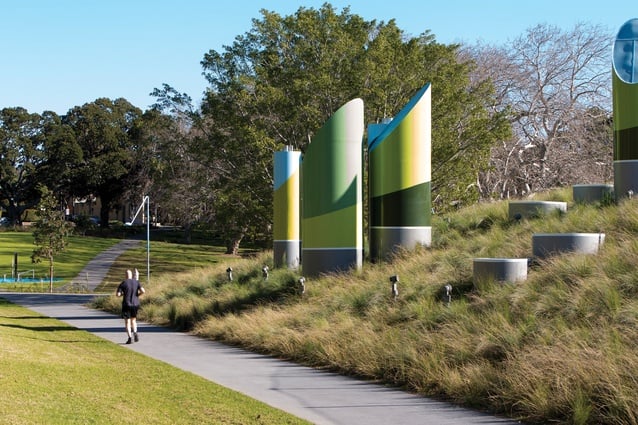 One of your biggest projects has been the incredible Prince Alfred Pool and Park. Were natives a part of the design brief and what were your objectives with respect to natives? Can you describe how you approached that project in general terms and what you most love about the park?

The renewal of Prince Alfred Park removed the old pool facility building from the middle of the parklands, allowing the landscape to be visually opened and re-graded, and amplifying its distinctive pastoral quality. New activities such as playing courts, fitness hubs, playgrounds, and picnic tables are concentrated along the railway edge and the new shareway, adding life. Park entries have been aligned with bounding streets and recast, making a distinction between the old and new. Pathways choreograph desire lines and shed storm-water to grassy swales for collection and reuse on the playing field, pool lawns and meadows, recalling the creek line that once flowed to Blackwattle Bay.

New plantings and avenues draw on the Victorian love of exotica, while a rolling, grassy topography blurs the park perimeter with an urban grassland ecology. The new pool building on Chalmers Street, a ‘folded landscape’ with a native meadow roof where two crisply shaped landscape mounds define the outdoor space of the pool enclosure, simultaneously connecting and separating park and pool.

The clue to the park’s planting character came as the design team uncovered key moments in the park’s history. We tied the 1870 Intercolonial Exhibition with the remnant avenues and plantings of figs, brushbox, araucarias, agathis and palms. Many of these species were collected from the rainforests of eastern Australian. The park canopy was renewed and extended using this palette of tree species, while an understorey of mostly local native plants speaks to the foundational landscape of this country. The native meadows add to the pastoral quality and biodiversity of the park. A special moment was the sighting of a blue shimmer in the unmown grass around the closed pool – the Native Bluebell is a talisman for the restoration of the grasslands at Prince Alfred Park.

“I love the playful character of the park and the memory of the Intercolonial Exhibition, the park’s new vitality and constant life, the late night basketball players, the lapping sound of swimmers in the early morning, the flowing folded quality of the new topography, the wild beauty of the grasses, the big sky and sense of free space in the city…” 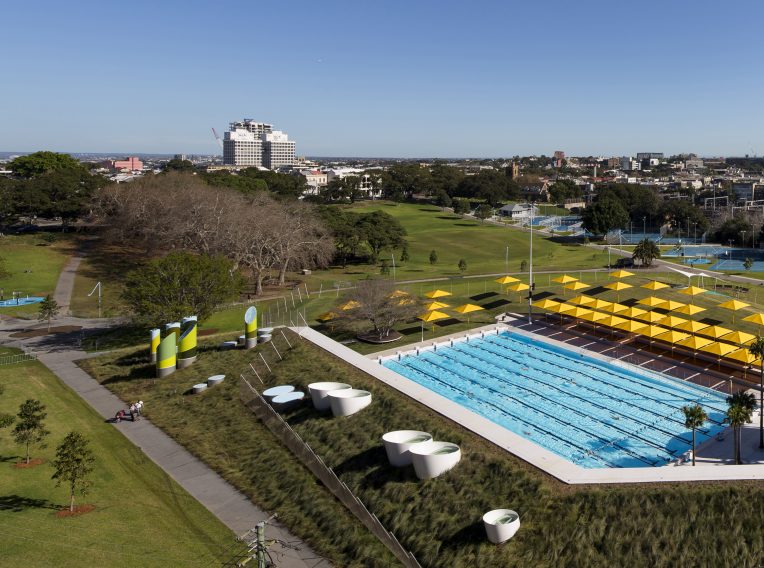 What other major projects have you worked on that are focused on natives, and what can you tell us about their designs?

In the inner city we have just finished a small garden rich with local Sydney sandstone vegetation. Sited next to a local park, a neighbouring Sydney Red Gum spreads its canopy over this garden, inspiring an understorey of grass trees, swamp banksia, white correa, slender rice flower, coastal tussock grass and flannel flower. With thyme, marjoram, sage and rosemary adding to the scent and the composition. The sense of openness and connection with the park is a stark contrast to the neighbouring walled courts of Leyland Cypress.

At a much larger scale we have been working with Neeson Murcutt Architects on a masterplan for Kamay Botany Bay National Park. It was here the Endeavor first made land fall on the east coast of Australia and it marks the historic meeting place of the Gweagal and the British Envoy. The project will refocus national attention on this site allowing all Australians to interpret and reflect on this moment. We have been looking at the site through the lens of Bank’s and Solander’s ‘Botanical Discoveries’ and paralleling this with an Indigenous connection to plants and Country. We’ve then used processes of ecological succession, restoration and abstraction to recast this meeting place in a way that heightens the experience of the landscape and is a platform for reconciliation.

Can you give some advice to people who want to start a native garden or incorporate natives into their existing garden.

Understand where you are: the soil, rainfall, humidity, the play of sunlight and the local plants that are naturally adapted to these conditions. There is an art to planting that goes beyond the science. I am always inspired by a bush walk and the alchemic possibilities of the landscape – how species combine, how they change with soil depth and increasing water, the quality of light, and mood. It’s about observation and interpretation. 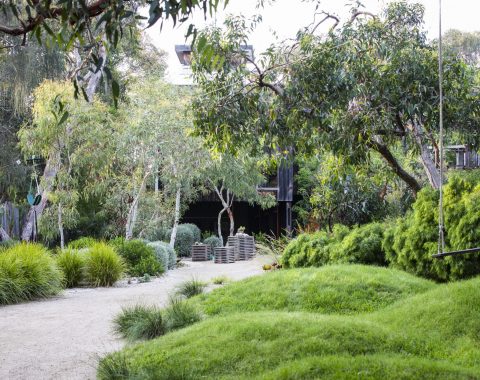 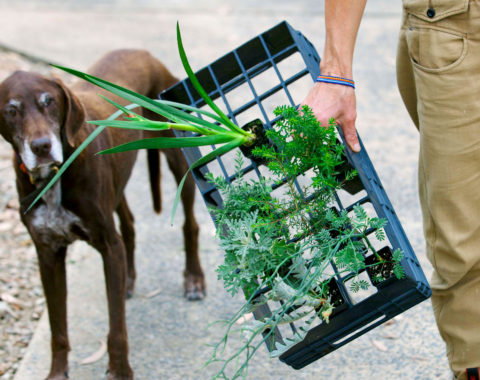 Create your own Native Plant Box