Florist, artist and revolutionary, Joost Bakker presses pause on his renowned eco-activism to talk about his first love, native flowers. 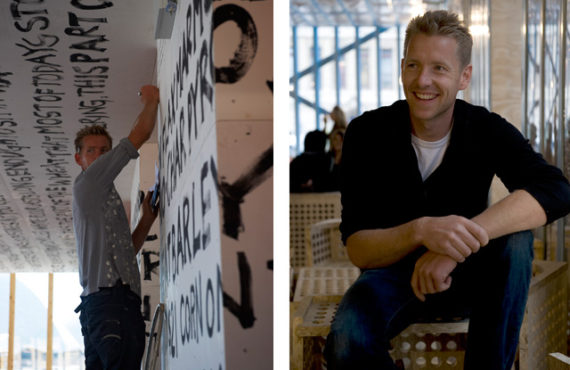 Clockwise from left: installations of flowering gum at Stokehouse restaurant; all native floral designs for a recent wedding and Joost Bakker on site at his original ground-breaking Green House projects.

“When we migrated to Australia in the early ‘80s we’d get in the car every Sunday and explore this amazing country – Sherbrooke forest, the Grampians and our amazing national parks. Some of my first memories are the smells, sounds, colours, the flowers that look like insects or bugs, and foliage that have incredible perfumes and shapes. As a new migrant I fell in love with Australian natives.”

On Joost’s own property in Monbulk, near Victoria’s Dandenong Ranges, he cultivates over 300 species. The six-hectare property is where he roams and dreams wildly with his wife and business partner Jennie, their three daughters Ruby, Charlie and Remi, two German Shorthaired Pointers and several egg-laying chickens.

“As a new migrant, I just fell in love with Australian natives….”

Dutch-born Bakker has floristry in his blood. His father was a fourth-generation tulip farmer and Joost and his three brothers grew up surrounded by flowers on their property.

Bakker started his own floristry business in the ‘90s, choosing to use natives on large scales, arranging them with recycled receptacles such as big glass acid jars, and re-writing the ‘daggy’ image they’d accumulated in the ‘80s. “When I started using them people saw them in a new light I suppose,” he muses. “My style is quite loose. I don’t imitate nature. I don’t try and recreate a plant. My designs are deliberately human-made.” By 2005 Bakker was designing abstract and eco-savvy floral installations for premium marquees at Melbourne Cup.

With good soil and plant-matter always on Bakker’s brain, by the 2000’s he began combining floral-artistry with investigations in environmental activism and eco-entrepreneurialism. His first Greenhouse by Joost ‘living’ restaurant project popped-up in 2008 in Melbourne’s Federation Square with iterations in Sydney and Perth following. In 2012 he opened Australia’s first zero-free restaurant, Silo, later morphing it into Brothl, a broth-kitchen, with a closed-loop composting system.

Building on those earlier visions, Bakker has continued to campaign for sustainable, bio-favourable design and living, but in the last decade, several large-scale design projects have stalled or been cancelled on account of unsympathetic bureaucracy.  Happily, the Greenhouse story is set to come full circle later in 2020, with the unveiling of Bakker’s latest undertaking at Federation Square. But the new Greenhouse deviates from the format of its predecessors.

Rather than operating as a restaurant, Greenhouse 5.0 is a combined home and urban farm with the ambitious goal of growing all the food its inhabitants cook and eat. Bakker believes urban food production is the future. Despite its modest 87-square-metre footprint, the new two-bedroom, three-storey Greenhouse is brimming with food production potential. 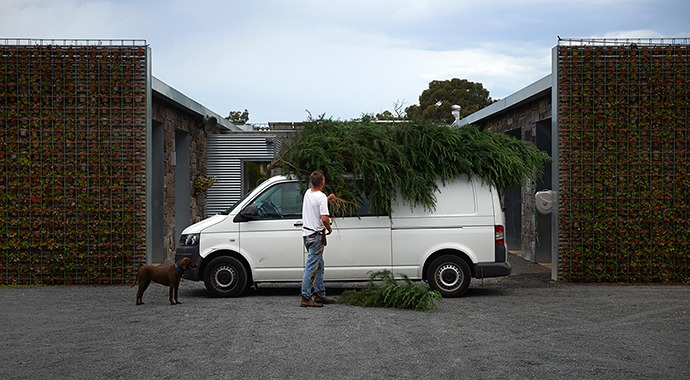 Joost at home on his Monbulk property, foraging for his latest installation. Photo credit: Earl Carter Joost’s latest ‘Green House’ creation under construction at Federation Square in Melbourne. Due for completion in September 2020.

Despite his frustrations around those lost projects and his ongoing quest to bring living greener into the mainstream, Bakker still finds refuge in his floristry, even more in love with Australian natives than when he first discovered them as a nine-year-old boy. He now grows native varieties such as various wattles and eucalypts amongst on his property, adding to his collection each year. 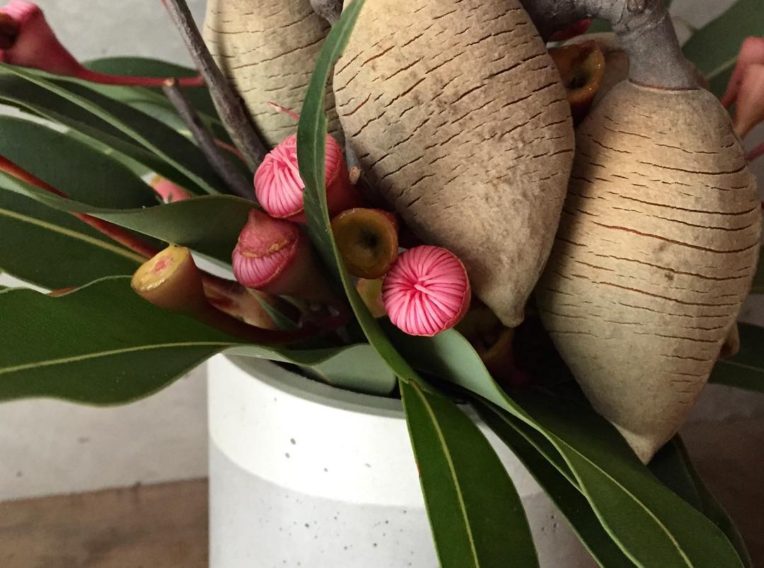 All native floral designs for the Australian Noma restaurant were a perfect compliment to Redzepi’s menu created exclusively with native Australian ingredients.

It was a nursery-man John Slijkerman who educated the young Bakker on Australian flora. “He saw something like a Wattle or Bottlebrush, and he would explain to me why they look and smell like they do, and how they’re pollinated, Everyone needs someone like that in their life to spark their enthusiasm.”

“Beauty is everywhere but it’s not until someone points it out that you become aware that it is. Things like the paperbark trees, the honey you get from them, the eucalypts in particular and the amount of ash and bark that came off them. I once did lots of sculptures with bark. I find them so amazing in so many different ways.”

“I just love them because they’re so unusual, and you know what, they grow really well here,” he laughs. “You can’t get much more sustainable than that really.” Joost’s giant sized floral installation at Lee Matthews boutiques  – “I picked massive bunches of eucalytpus with tiny red flowers because it was at its best….”

“Crop growing almost always has a detrimental effect on the environment, whether you’re growing tulips, lilians, chrysanthemums, or carrots. It doesn’t matter what you grow. When you hoe the soil for carrots and fertilise and spray, you’re killing the worms and the microflora in the soil. Natives are one of the few crops that you plant and you’re actually encouraging biodiversity.

“Most native nurseries have a huge range so they have pollinators in birds, and lots of insects. When you walk into a nursery with natives it’s like you’re walking in a forest filled with life. You also never pick all of of one species. I picked waratahs for Rockpool restaurant last night and they were full of honeyeaters and birds, so I decided to wait until the sun went down. There’s lots of half matured ones that you can’t really pick but the birds are happy to still take from those so with most native crops there’s a lot for birds and insects to feast on.”

Bakker has hundreds of native plants at his own property, all flowering at different times, with varying perfumes.

“My clients go crazy for them now. Twenty years ago it was really hard work to convince cafes and bars to take wattle – the pollen was a problem, dropped too much, only looks good for two days, and so on. Now people go crazy about a massive armload of wattle and they don’t care that it drops.”

He chooses varieties according to the shade, shape of the leaf, architecture of the stem, the flower colour, and flower. “Sometimes it might remind me of a book or film or reminds me of when we first migrated. It’s so varied. It might be a grevillea that is identical in colour to a waratah and flowers at the same time so I’ve got something to mix with waratahs.”

“Last week I picked 250 massive bunches of eucalyptus with tiny red flowers so all my clients had the same thing because it was at its best. I just use it when it’s there and it might only flower for two weeks.”

A career highlight was working with renowned chef René Redzepi at the 2016 Sydney instalment of his Copenhagen restaurant, Noma, frequently cited as the world’s ‘best’. Redzepi’s menu was created exclusively with native Australian ingredients, and Bakker’s floral designs were the perfect native compliment.

Inspired by the regenerative capabilities of Australian botany, specifically its ability to regenerate, thrive and germinate after bush fire, Bakker found various hakea seed pods, burnt and charred them, then mixed them with fresh eucalypt flowers, grevillea and wattles. “I picked everything here in Victoria, drove up and did the opening, then guided local florists on how to do the rest,” Bakker recalls. There were also two large native grass trees planted into the sunken floor of Noma’s dining room, relocated by the architects after the pop-up project finished. 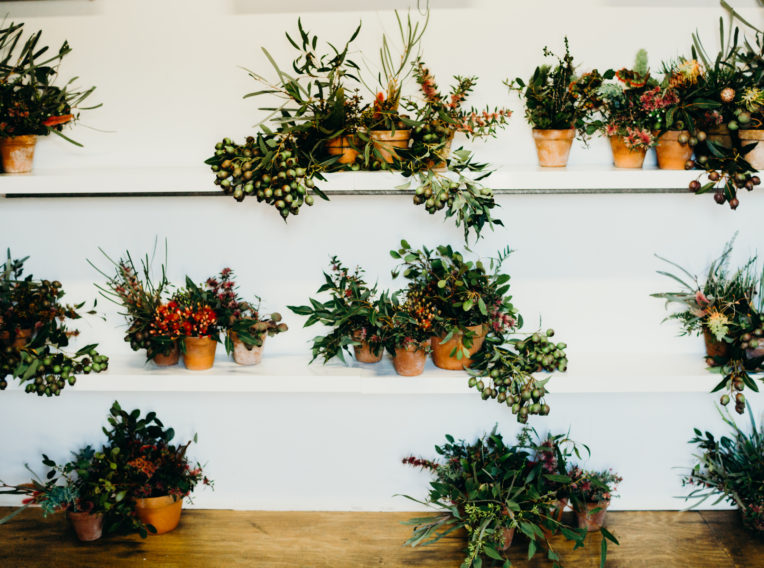 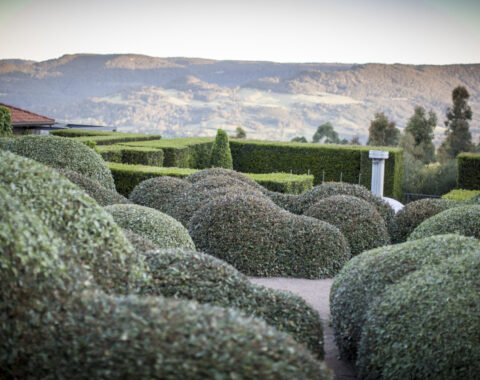 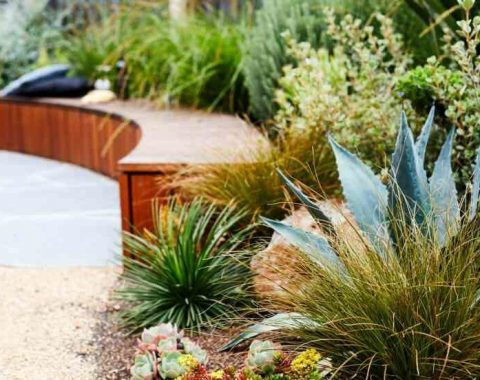 A backyard big on heart